Here is a listing of the eight special daily episodes that made up the ICFslalom HND podcast series. 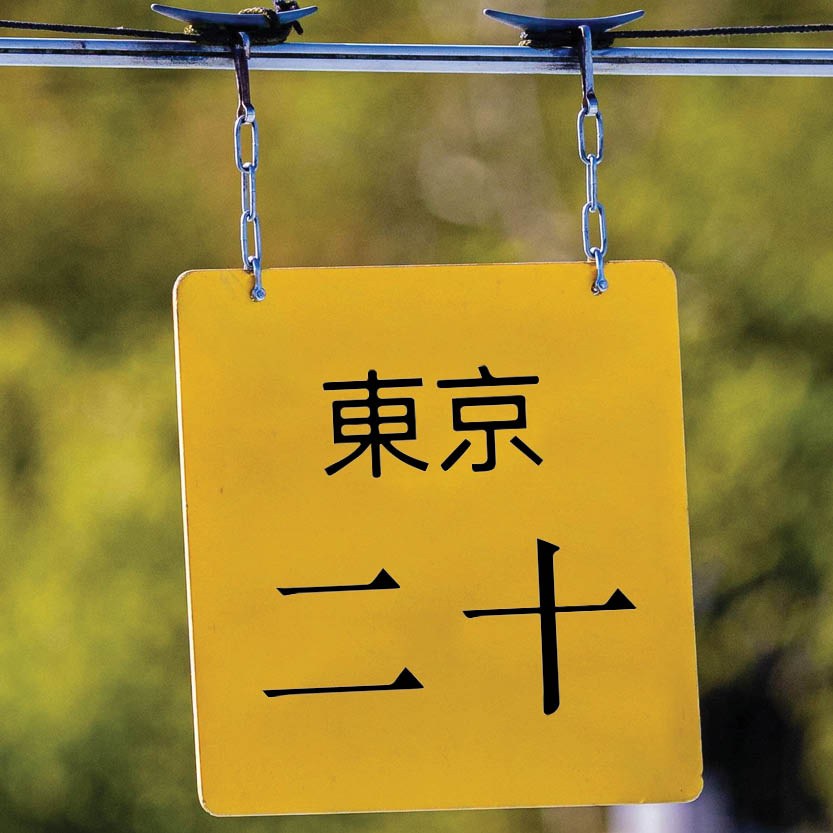 A special daily series of the ICFslalom HND podcast is now available on Spotify and Apple Podcasts. There will be eight 5-10-minute episodes featuring Olympic medallists, paddlers, and commentators reviewing the days results and providing a preview for the next day.

This podcast started as an idea after Rio. We did a pilot episode at the 2019 International Canoe Federation (ICF) Canoe Slalom World Championships in La Seu d’Urgell. That episode featured the teenager Evy Leibfarth (USA). The episodes continued and evolved into this special daily edition.

We hope you like it. Remember to share and leave a review on Spotify or Apple Podcasts.

The 13 hour time different between Canada and Japan adds an extra element.

Thanks to the many people behind the scenes that help put it together. These include Ross Solly, Adam Collins, Kim Jones, Natasha Wilson, Paul Wilkinson, Jenny Butler, Mally Johnson, Andy Maddock as well as all the guests. It has been a pleasure to connect again with so many of the former Olympic Medallists from 1992 onwards. See the podcast episode listing and guests here.

If you are interested, we are editing on a MacBook using Audacity. My contributions were recorded using Smart Mike and Telepromoter. The podcast is hosted on Libsyn. Several of the contributions were shared via WhatsApp and Messenger. The audio quality was surprisingly OK. 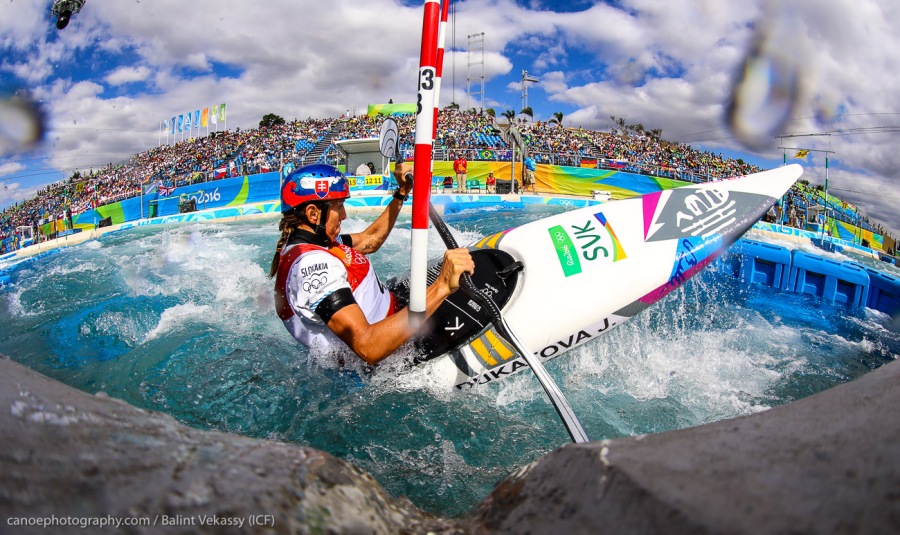 I have been fabulously privileged to share our love for canoeing with the rest of the World. Rio was a huge inspiration; deeply disturbing; profoundly sad and proof in the value of teamwork.

In the space of three weeks, I produced a 24,000-word blog series and more than 1,000 live tweets using hashtag #ICFslalom and #ICFsprint. We have one final post soon on the Planet Canoe Rio 2016 blog with what the social analytics tell us.
Don’t forget the Paralympics. These athletes deserve our attention and recognition too. I will be tweeting #ICFparacanoe @PlanetCanoe
I didn’t compete. That doesn’t matter. I know I have left Rio, faster, higher, stronger and more enriched than when I arrived. Adeus Rio. 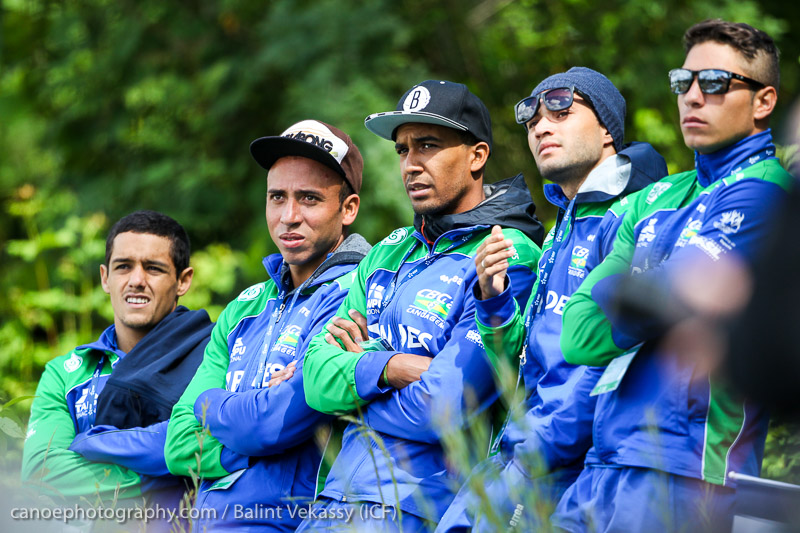 Here is a quick reference index to my daily Rio 2016 canoe slalom blog on the ICF Planet Canoe website.

Junior & U23 paddlers on the rise

Canoe slalom support from the bank – the coach

The all seeing eye of the judge

Canoe slalom from behind the lens

All eyes on Deodoro 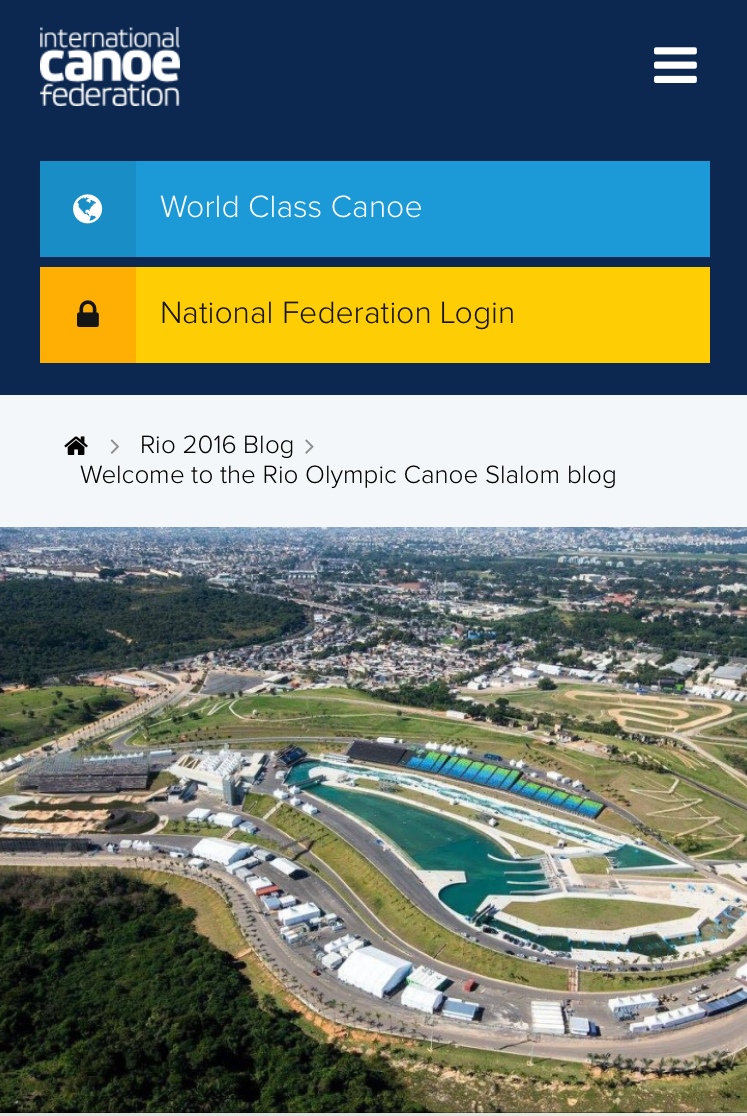 Welcome back to the daily canoe slalom Olympic blog. A whole 4-year Olympic cycle and we are back here again.

Welcome to my 2016 contribution that is published on the International Canoe Federation (ICF) website. This is intended to provide the one-stop shop for everything you could possibly wish to know about canoe slalom at the Rio Olympics.

END_OF_DOCUMENT_TOKEN_TO_BE_REPLACED 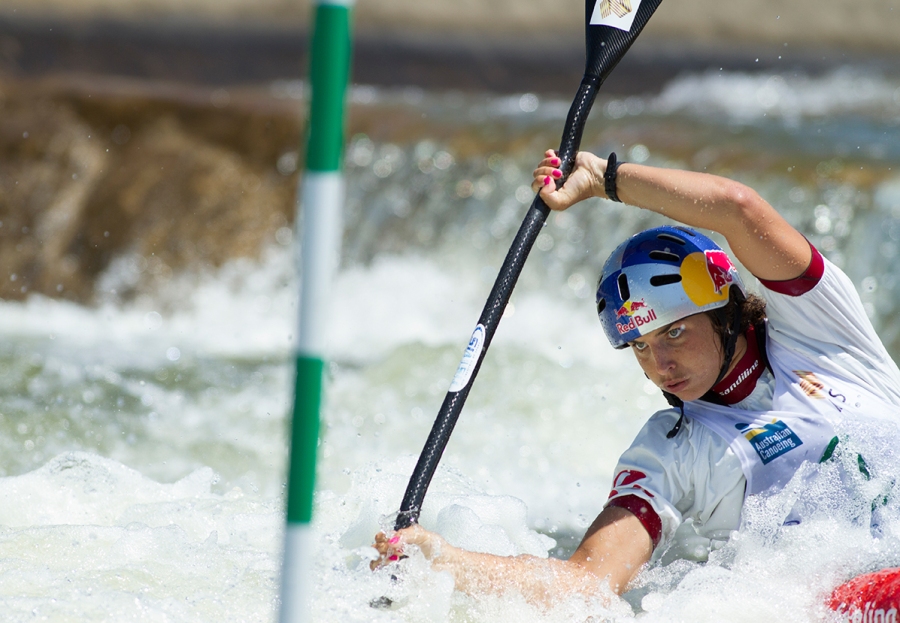 The run in to the Rio Olympics begins. We expect many more paddlers around the globe will be able to say Qualified for Rio in the Canoe Slalom, Canoe Sprint and Paracanoe.

I will be providing commentary on Twitter through @PlanetCanoe on behalf of the International Canoe Federation (ICF). We have World Cup races between now and Rio in all three olympic events.

END_OF_DOCUMENT_TOKEN_TO_BE_REPLACED

Here is a full listing and links to my canoe slalom articles during 2015. These were posted to Sportscene.tv, International Canoe Federation as well as this blog. Through the year I provided live race commentary on Twitter via @gregiej @planetcanoe and using #ICFslalom.

END_OF_DOCUMENT_TOKEN_TO_BE_REPLACED

Here is a full listing and links to my 2015 articles posted on Sportscene.tv during 2015. For live ICF race commentary follow me on Twitter @gregiej. Below you can follow the links to both previews and reviews of the Junior / U23 ICF World Championships, ICF World Cup series and Pan Am Games #TO2015.

The tide has turned for the British in Prague as a kayak nation becomes a canoeing nation. They have long been recognised as a nation very strong in both kayak men and women (K1M & K1W) yet at these Worlds Great Britain has achieved something quite unique with senior World Championship titles in both C1M and C2. This adds to their London Olympic gold and silver in C2. Yesterday was defined as a day for their first C1M World Championship title Sunday in Prague they now have a C2 World Championship title too. To cap it off Mallory Franklin took a well-deserved silver in C1W and the British C2 team secured a beautifully orchestrated bronze in the C2 Team event.

In K1W, Émilie Fer (FRA) put down a confident run of 111.74 + 4 seconds to win by 2.20 over her French team-mate Nouria Newman in silver medal position with Jasmin Schornberg (GER) +4.21 seconds taking the bronze. In the end the final was considerably slower than the semi-final and no paddler managed to finish this extraordinarily tough course with less than 4 seconds of penalties.

In C2 finals David Florence already C1M World Champion this weekend and his back-man Richard Hounslow put in a solid, controlled and crucially clear run in the final with 114.10 seconds. The noise levels rose to a crescendo with three Czech C2 crews coming down after them. It was an agonising wait for Florence & Hounslow but only Ladislav & Peter Skantar were also able to go clear and as it often the case it all came down to penalties. The silver medal went to Jaroslav Volf & Ondřej Štěpánek (CZE) 0.04 seconds or less than one stroke behind the British. It is a dramatic way for Volf & Štěpánek to exit as these Prague World’s were their last race. Ladislav & Peter Skantar took the bronze for Slovakia +2.01.

In the earlier semi-final the Pavol & Peter Hochschorner uncharacteristically seem to miss one key stroke which forced them to loop back for gate 10. It was evident that they immediately recognised it was all over.

It has been a tremendously exciting World Championships. The events was characterised by tight, exciting racing in a well-managed event. Congratulations to the Českého svazu kanoistiky organisers for battling back to clear the damage left by the flooding and pull of a great World Championship event. Daniel Stach and Miroslav Lenc did a great job with their live race commentary and whipping up the supporters in the stands.

A full Worlds review can be found here on the Sportscene website, including a round-up of the full 2013 slalom season. An interview with the Brazilian team is also in preparation and will follow soon.

John Gregory – @gregiej – While Friday will be remembered as a day of unexpected exits, Saturday became a day of celebrating new champions.

While the Czechs loudly celebrated their men Vavřinec Hradilek and Jiri Prskavek and while the Australian’s their golden girl Jessica Fox, the British humbly celebrated new heights in C1 paddling with a first ever gold in C1M and first ever silver in C1W at senior World Championships.

For the British, the late Martyn Hedges won a bronze in C1M in Augsburg in the 1985 Worlds before Gareth Marriot won a bronze in Três Coroas in 1997; Great Britain had never had a C1M World Champion. Despite Gareth’s Olympic silver in ’92 and David Florence’s silver in 2012 it is the first major win. It was sweetened still as David was awarded as new World Champion by the sports legend Tony Estanguet. Mallory Franklin also won a tremendous first for British C1W with a silver medal to add to her gold in the 2013 U23 European Champions in Bourg St Maurice.

The day truly belonged to the Czech’s and Vavřinec who did not disappoint their home support with a phenomenal 94.52 seconds including a touch K1M winning run in Troja. The local Czech supporters were utterly deafening and the Czech commentary got faster and faster.

In C1W, 19 year old Jessica Fox from Australia maintained her excellent 2013 consistency and composure to win by a whopping 12.99 seconds on a not entirely perfect run with 6 seconds of penalties. The lead switched multiple times but as Fox made her way down the 1st and 2nd split gave a clear insight into who would likely take the title. Quite a year for the still young Fox, 2013 World Cup series champion, senior World Champion and U23 World Champion.

In C1M, 31 year old David Florence from Great Britain was one of the earlier paddlers down in the final and maintained his advantage despite a 2 second penalty. His run time of 100.53 + 2 seconds in penalties was the fastest C1 and more than 2 seconds faster than anyone else. It was an agonising wait for Florence as seven of the World’s top C1 paddlers made their way down including reigning World Champion Denis Gargaud Chanut (FRA) and then last Olympic silver medalist and 2013 World Cup series champion Sideris Tasiadis (GER).

In K1M, the day belonged to 26 year old Vavřinec Hradilek. Absolutely sensational and no doubt buoyed by the incredible noise from local support all the way down the course to the finish. Local 20 year old Jiři Prskavec (CZE) had taken the lead with 6 paddlers remaining in the final with 95.90 seconds clear. While he surrendered his lead to his older and more experienced team-mate both then had to wait for the remaining 4 paddlers to finish before there was an almighty cheer from both the stands and Czech team.

I was pleased to see Daniele Molmenti gain his revenge with an Italian win in K1M Team. Australia bagged the C1W Team gold as they should and Slovakia took the gold in C1M Team to round off an exciting scorcher of a day.

So still to come from Troja tomorrow Sunday September 15th are the K1W & C2 semi-final & finals followed by the K1W & C2 Team races. Both today’s winners Jessica Fox and David Florence will be back racing in K1W and C2 classes respectively. The classes are very tight and open with a multitude of paddlers capable of a win.

I will again be live tweeting @gregiej which you can follow on the www.sportscene.tv/liveresults page or search #slalomtroja. Slalom World are posting a rather interesting gate analysis http://www.slalomtroja.com/gates/ showing on which gates paddlers were incurring both 2 second and 50 second penalties.