It was an exceptional night; a real privilege to be surrounded by so many inspiring people, so passionate about Paddlesport. Congratulations to all the winners also to the World Paddle Awards faculty and Augsburg hosting team for such an incredible event. We were all inspired by the winners. Eric Jackson talked about finding paddlesport as “a worthy purpose”. We were all moved by the Expand & Extend Nepal, both in light of the devastating earthquake and what they are doing to promote equality for girls through paddlesport.

These WPA cause me to reflect back to standing on the banks of the river Dee for the Llangollen International with Jennifer Munroe. [Jennifer was Richard’s mother, Jessica‘s grandmother. It was wonderful to see her husband, son, daughter and granddaughter in Augsburg last night]. Together we were writing old fashioned press releases to fax to the media to gain some precious column inches. It was a real catch 22; needing sponsors to attract media and media to attract sponsors. It is poignant to be here in Augsburg 25 years later for these first World Paddle Awards surrounded by sponsors and media.

Augsburg has such a rich history in paddlesports. Few people appreciate that the original Eiskanal pre-dates the 1972 Olympics and was the site of the ICF Canoe Slalom World Championships in 1957. For both 1972 and 1985 the slalom course started above the top sluice and ran for more than 600 metres. I was here for the 2003 World Championships to see Fabien Lefevre successfully defend his K1M title. Augsburg has continued to be very innovative across many paddlesports and we were made exceptional welcome in the city.

I am very honoured to have been among the finalists and on the podium! You can revisit my Twitter feed from last night and follow the canoe slalom races this year @gregiej on Twitter. My World Cup preview will follow early next month on Sportscene.

Final word. The WPA are supporting Kanu Nepal-Hilfe raising much needed funds to support the region. Well done. WPA has today announced that nomination for 2015 awards will commence this September.

A GB Canoeing sponsored initiative to inspire the next generation of Canoe Slalom paddlers has started at the Olympic Lee Valley venue just north of London. Here is a taster of what the initiative aims to achieve and how the first sessions have gone.

After writing about Lee Valley for the anticipated Olympic canoe slalom races for more than two years, I finally had the opportunity to view it from water level. The Olympic course is harder than if looks! It is tiring, the drops are big and visibility down a pending drop is very limited so in slalom you would really have to know your exact line. I was surprised how boily the sides of the course are.

I have been asked to contribute to the ICF Planet Canoe, describing this use of social media in communicating Olympic canoeing. 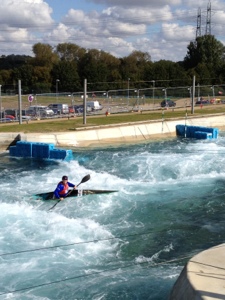 It was observed that my boat is a little long!

In an earlier post I suggested that it was not a question on whether Australia’s young 18 year old Junior World Champion would win a medal, only at which Olympics and what colour. For her to win a silver medal this afternoon at Lee Valley during London2012 is truly mind blowing. She won the Junior World Championship only last month in Wausau, USA.

For those in the sport, the name Fox is possibly the best known. Her father Richard was the 5 time World K1M individual champion between 1981 and 1993 (11 medals in total). I was blessed today to sit beside, Roger, Jessica’s grandfather to witness the GB C2 Gold and Silver and then Jessica’s silver medal in K1W. Jessica is coached by her mother, Miriam Jerusalmi-Fox who also won two World Championships (10 medals in total). Dad, Richard had the agony of a fourth place finish in Barcelona in 1992 so today will be a special day for the whole Fox family.

The K1W Olympic Gold medal was won by France’s Emilie Fer, 29 in a clear run of 105.90 seconds. Emilie had previously been 7th in Beijing and 4th at the 2011 World Championships. It is France’s second gold medal at Lee Valley following Tony Estanguet’s gold in the C1. Silver went to the young Jessica Fox and bronze to Maialen Chourraut.

So it only begs the question what we should expect from Fox in the 2013 Senior World Championships, Rio Olympics in 2016 and beyond? Richard inspired so many of us to take up canoe slalom it is truly special to see the legacy continue with a role model for a new generation.