OK, let me indulge for the day with a little more UK flavour. There are five paddlers selected by the British Olympic Association to represent Team GB at the Olympic Canoe Slalom at Lee Valley. They are:

As you may know if you have been following this blog from the start, Great Britain is the only nation to have qualified a fifth boat in canoe slalom for the Olympics, nine other nations have four boats and the remaining twenty nations between 1-3 boats respectively. So why I hear you ask? Well, for a new Olympic Games commencing London 2012 if the selected pair in C2 have also been selected in the individual classes then the nation is entitled to qualify a second mens C2 boat to the Games. Richard and David had qualified for the individual K1M and C1 classess respectively, so can also paddle C2 at the Olympics. Incidentally they also won GB Team selection in C2, but the rule allows Team GB to send a second C2 crew of Etienne Stott and Tim Baillie.

So in C2, the number of boats at the Olympics has risen from 12 to 13 and Great Britain has two C2 crews amongst the 13 at the start of the heats. Looks good. Better still when both crews have medalled at previous World Championships together in the team event and David & Richard have taken a win at the 2012 World Cup race. From memory, I think Fabien Lefevre from France is the only athlete that comes to my mind to compete at a World Championship in two classes. David & Richard I believe will be the first paddlers to compete in two classes at the Olympics in canoe slalom. There has been much discussion about whether this is physically and mentally possible or whether an athlete should choose and focus on only one class. Well the proof is that both David and Richard are in exceptional shape and mentally tough. They have proven through previous World Championships, World Cup races and GB Team selection that they can handle it. It does of course also give them extra water time on the course compared to other athletes so could present an advantage.

David Florence, 29, who like Tim Baillie also hails from Aberdeen, Scotland moved down to the area to train full time on the course, juggling the demands of C1 and C2. He brings experience to the team as the only one of the five Team GB paddlers competing in Lee Valley to have competed in a previous Olympic Games, from which David won a C1 silver medal in Beijing. Like Lizzie Neave he had become British Champion back in 2005 which he held for the next two seasons. He starts the heat of London2012 as the ICF World ranked number 1 in C1 following a win at the first World Cup race in Cardiff and silver in La Seu D’Urgell. He appreciates that whilst every athlete is on their own to lay down the ultimate run, Michal Martikan and Tony Estanguet also come with exceptional experience and flare. David has beaten them both in the past and was World Cup series champion in 2009.

Richard Hounslow, 30, is the local amongst the Canoe Slalom team having grown up in Harrow. He is a former British National Champion. He and David did not start competing together in C2 until the 2009 season, when he became one of the first paddlers to compete in K1 and C2 classes. In 2010, Richard and David won bronze at both World and European Championships in the C2. This was highly significant in UK C2 terms. It is the first and only individual C2 World Championship medal won by Great Britain in C2, although there had been a few C2 Team medals. (I will describe the Team event in a subsequent blog post but enough to say it does not apply to the Olympic Games).

In ladies kayak, Lizzie Neave, 24, won qualification to these Olympics in emphatic style winning all three selection races in April. It was mighty tense down to the very last paddler down. Lizzie came up through the sport as part of the Stafford & Stone canoe club, who have won 19 Interclub Championship since 1985! At the age of 14 Lizzie made the British junior team. In 2005, still a J18 paddler, Lizzie became British National Champion for the first time, giving us a glimpse of what to expect from her in the future as her strength and race experience developed further. This materialized at the senior World Championships in La Seu d’Urgell where in 2009 she became K1W bronze medallist and World K1W Team Champion. She is in good form following her bronze medal at the 2011 European Champions and last month’s bronze medal at the Pau World Cup race 2.

Lizzie is coach by Paul Ratcliffe who won a silver medal in K1M in Sydney. There are many similarities between the Lee Valley course and the Penrith Whitewater centre as well as La Seu d’Urgell, all of which are artificial slalom course built for recent Olympic Games. In a Canoe Focus issue Lizzie described how important it was to her to move down from Nottingham to London to be close to the Lee Valley course.

Back to C2, our second crew is Etienne Stott, 33, & Tim Baillie, 33. Stott & Baillie were British National Champions in 2008, 2009 and 2010.  In both 2009 and 2011 they were part of the 3 boat C2 team which won bronze medals at the World Championships in La Seu d’Urgell and and Bratislava respectively. They have had a good 2012 season currently lying 3rd overall after the first three World Cup races in Cardiff, Pau and La Seu d’Urgell. They are coached by Nick Smith, who represented Team GB in C2 at the Sydney Olympics. 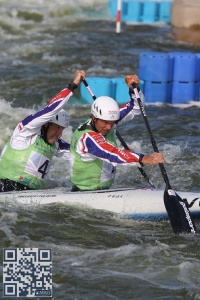 More can be found at GB Canoeing website. Over the next week I will share one post a day to explain the four classes, K1M, K1W, C1 and C2 profiling the boats, paddles and techniques. Stay tuned. Tomorrow’s post will pay tribute to a true trail blazer in canoe slalom remembering Martyn Hedges who we lost 20 years ago just before the Barcelona Olympics and looking at how the sport has evolved since it came back into the Olympic programme in 1992.